Written by Adam Hollander
Updated over a week ago

Products that do not meet this minimum eligibility requirement your company will be disqualified from the competition. 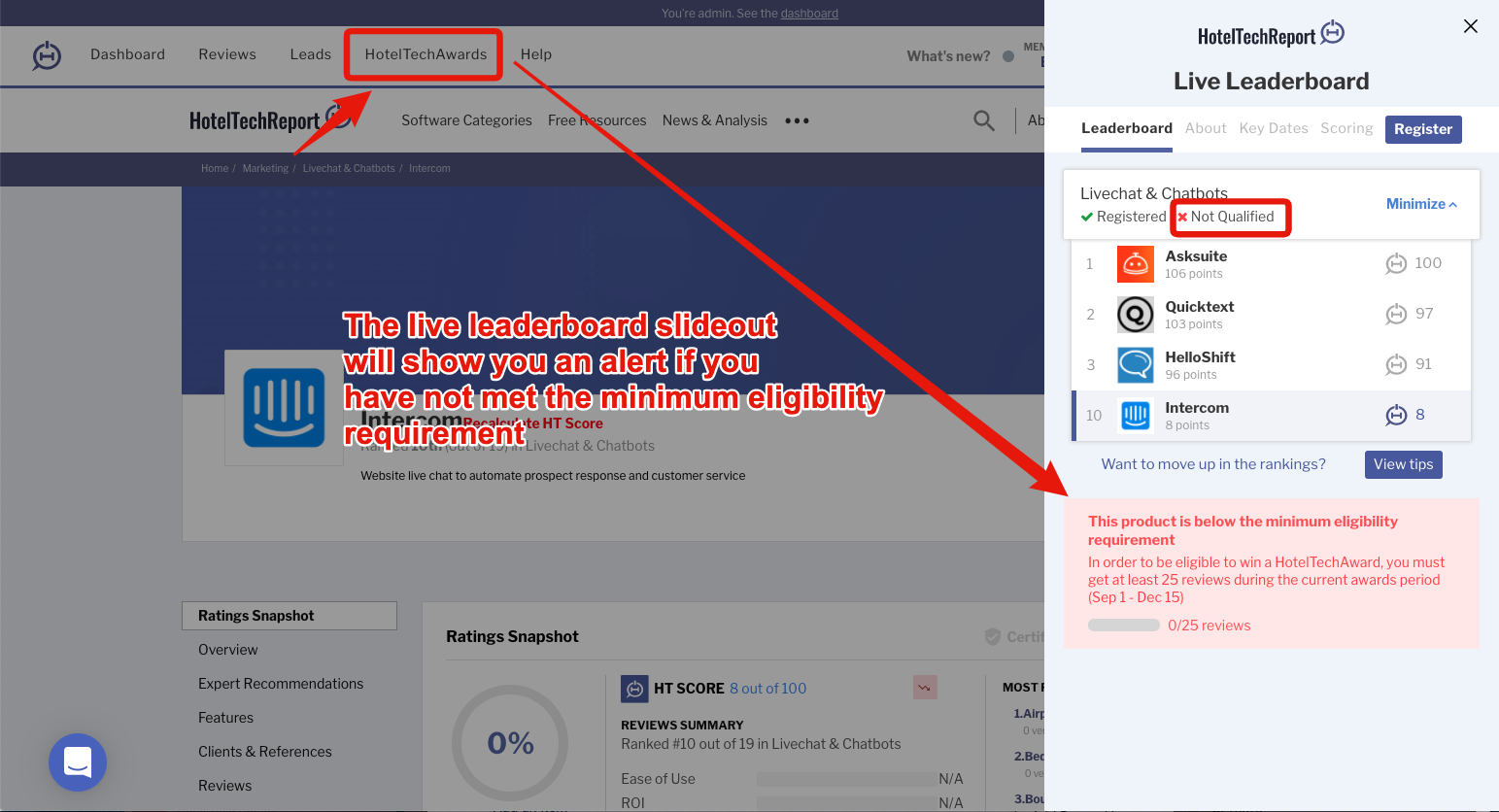 The annual HotelTechAwards period is September 1st-December 15th every year which is the time period where the competition runs and participating companies run review campaigns to compete for the top spot in the category leading into the end of the year.

Why is the Minimum Eligibility Requirement in Place?

The eligibility requirement is in place ultimately to increase the value of winning a HotelTechAward for companies who collect meaningful and strong customer feedback to win.

25 reviews is the 'golden number' when it comes to trustworthiness and review websites which is why this is the minimum eligibility requirement and covers both:

We hope that participating companies understand why ultimately the reason winning a HotelTechAward carries so much weight and is so valuable stems from the fact that it is a real badge of honor based on merit and real user feedback and this is what creates the most value for the customer centric companies that work hard and go on to become winners.

Do reviews prior to the awards period count towards the HotelTechAwards scoring?

In short, yes. While the awards period runs through Q4, reviews from the trailing 18-months are factored into the HT Score meaning that these do count towards scoring but THEY DO NOT COUNT TOWARDS THE MINIMUM ELIGIBILITY REQUIREMENT UNLESS THEY ARE LEFT DURING THE AWARDS PERIOD. While the awards are run in Q4 leading into the upcoming calendar year, they are meant to signify the highest performing companies of the year.

Are reviews from the current calendar year and awards period weighted more heavily?

While they are not weighted more heavily in the HT Score algorithm, reviews from the current calendar year at the end of the awards period do in effect get weighted more heavily because they account for two thirds of the reviews that get factored into scoring. For example on December 15th when data is exported to determine winners of the current year awards period the trailing 18-month reviews that are factored in include:

In essence, the trailing 18-months from the closing of the awards period is July of the previous calendar year meaning that the majority of the eligible review period (66%) is from the current awards year's calendar year essentially weighting current year reviews more heavily.

Learn more about the HotelTechScore

What is the minimum eligibility requirement and how many reviews do participating companies have to get during the current year awards period to be eligible to win a HotelTechAward?

While reviews from the trialing 18-months count towards scoring, companies are required to get a minimum of 25 reviews during the current year awards period in order to be eligible to win a HotelTechAward. This ensures that even in less competitive categories that the award stands for the highest level of quality and is only achievable by high growth companies who are relentlessly customer centric. If your company doesn't have 25 users who will vouch for the product and vote for you during the current year's awards period unfortunately you will not be able to win a HotelTechAward. For example, a company in a less competitive category can't get a handful of reviews and win a HotelTechAward which ensures that only truly credible and deserving companies are able to carry the badge increasing its value, credibility and trust in the marketplace.

(Note: Prior to 2021 the minimum eligibility requirement was 10 reviews in the current year awards period. This requirement was increased to ensure that only companies with meaningful customer feedback levels and advocates are eligible to win even in less competitive categories).

Did this answer your question?